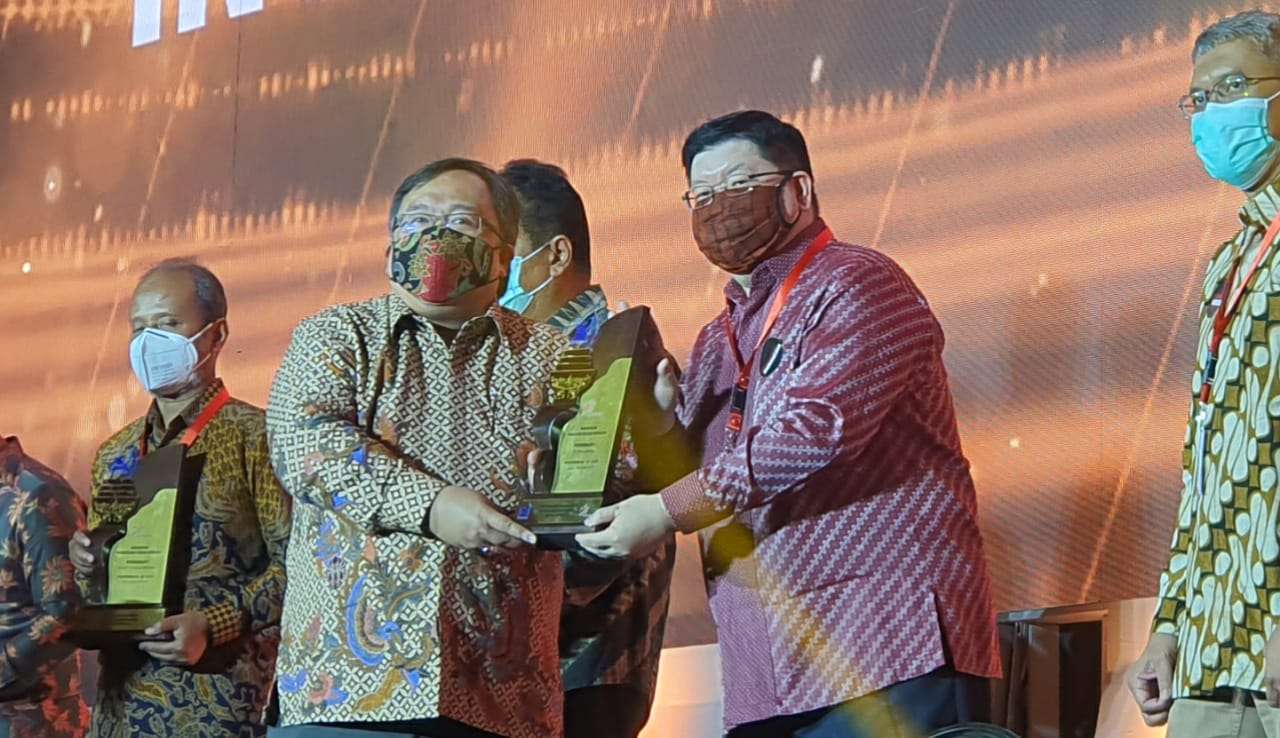 Dexa Group, through PT Dexa Medica, won the 2020 Innovative Industry Award from the Ministry of Research and Technology/National Research and Innovation Agency (Kemenristek/BRIN). The award was given for Dexa Group’s commitment to developing Native Indonesian Modern Medicine (OMAI).

The 2020 Innovative Industry Award was opened with remarks from President of Republic Indonesia Joko Widodo (Jokowi) on Tuesday, November 10th, 2020. President Jokowi emphasized the importance of developing research-based innovation in the domestic industry.

“Indonesia needs more innovators in various public sectors, such as food, energy, and health, including innovation in business model management and digital-preneur. Therefore, I invite innovators to contribute to the national development, to humanity, and a better life,” said President Jokowi in his remarks.
Minister of Research and Technology/Head of the National Research and Innovation Agency, Prof. Bambang Brodjonegoro stated in his speech that triple helix collaboration is necessary for realizing innovation so that it can be produced as an export commodity. He said that President Jokowi had given direction to take lessons from the Covid-19 pandemic. The innovation of research, development, testing, and application (Litbangjirap) would focus on the national resilience and vigilance, Covid-19 vaccine, independence of medical devices and medicines, and quality and sustainable life.

“The independence of medical devices and medicines, including the development of Native Indonesian Modern Medicines,” said the Minister of Research and Technology.
Executive Director of Dexa Laboratories of Biomolecular Sciences (DLBS), Dr. Raymond Tjandrawinata received the award directly from the Minister of Research and Technology Bambang Brodjonegoro. “The Innovative Industry Award is a form of government appreciation for industrial research and development activities in Indonesia. Dexa Group has been developing Native Indonesian Modern Medicine for 15 years and continues to be consistent. This is in accordance with Dexa Group’s core purpose, Expertise for the Promotion of Health,” said Dr. Raymond after receiving the award at the Kemenristek/BRIN Building, Jakarta.

OMAI as a substitute for Imported Medicinal Raw Materials

President Jokowi previously stated that around 90 percent of drugs and medicinal raw materials in Indonesia were still imported. The President then said that Indonesia’s rich biodiversity should be utilized as the basis for the revival of the domestic drug industry.

“Biodiversity must be utilized to strengthen community resilience in the health sector. Phytopharmaca drugs need to be facilitated to pass clinical trials and standardization so that they become promotive and preventive treatment options,” said Jokowi at the dedication ceremony of the National Working Meeting (Rakernas) and the 2020 Annual Scientific Meeting of the Indonesian Pharmacists Association, Thursday, November 5th.

According to data from the Central Statistics Agency (BPS), during January-September 2020 the import value of pharmaceutical products in Indonesia reached US$ 858.28 million. The development of OMAI can be a solution to substitute imported raw materials for drugs.

“Dexa Group’s commitment is in line with the government’s program to reduce dependence on imported medicinal raw materials, as stated by President Jokowi. Dependence on imported medicinal raw materials can be reduced through pharmacological research. These researches use plants and animals as medicine, by leveraging the biodiversity that has been inherited from our ancestors, “added Dr. Raymond.

Dexa Group is not only developing OMAI for promotive and preventive health efforts but also curative medicine. One of the OMAIs developed by the Dexa Group, Inclacin, has been clinically proven to help lower blood sugar in diabetes patients. This product has even penetrated foreign markets, one of which is the Philippines.
OMAI is developed from natural ingredients that come 100 percent from Indonesia and involves Indonesian researchers. Besides, the development of OMAI also helps improve the economy, especially for farmers.

According to the Minister of Research and Technology, doctors in Indonesia have to get used to OMAI. During the discussion, the Chairman of the Indonesian Herbal Medicine Doctors Association (PDHMI) dr. Hardhi Pranata encouraged more doctors to prescribe OMAI in health care facilities.