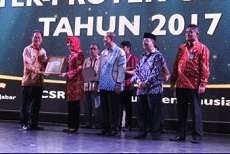 Dexa Medica received another Certificate of Appreciation for the third time through its CSR activities in West Java implemented throughout 2017. The company received not only the certificate but also an award plaque for its sustainable health education program in 13 villages which has been running since 2016 in collaboration with LPPM Jababeka.

The award ceremony was held in conjunction with the Inauguration of West Java CSR Project at the Intercontinental Bandung Hotel, Dago Pakar Resort on Tuesday, 17 April 2018. It was awarded directly by the Chair of West Java Legislative Council (DPRD), Ineu Purwadewi Sundari representing the Governor of West Java, Ahmad Heryawan, accompanied by the Head of the West Java Regional Development Planning Agency (Bappeda), to Dexa Group’s representative, Yerry Yanuar.

This award was given for Dexa Medica’s contribution through dharma dexa activities throughout 2017, in order to help the government build a healthy society. The routines carried out are Health Counseling, Free Medicine, Activities in the field of education, especially in 4 universities in West Java which are UNPAD, ITB, UI and Pancasila University involved in University Engagement.

Besides Dexa Group, similar awards were given to 131 other companies this year. These 132 companies won the awards for their continuous and active support in developing West Java through social activities. Corporate Communications Dexa Medica