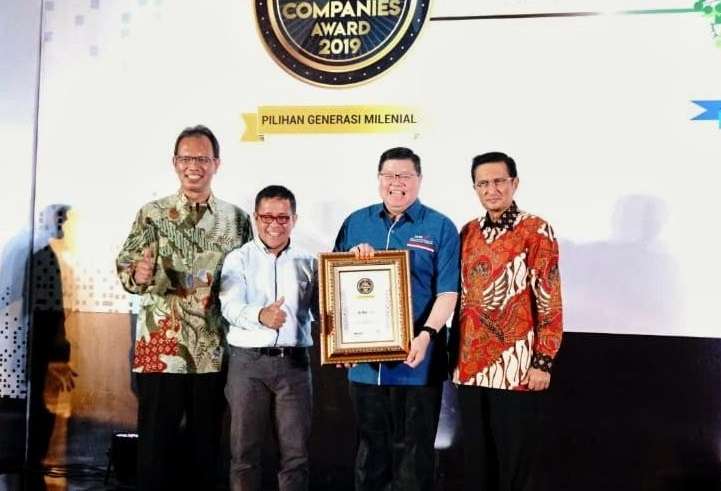 Towards the 50th anniversary of Dexa Group, PT Dexa Medica received the title of Excellent in Research and Development of Modern Medicine at the Indonesia Most Admired Companies (IMACO) Award 2019 event organized by Warta Ekonomi. This award proves that PT Dexa Medica as one of the leading National Pharmaceutical companies in Indonesia prioritizes research and development to produce new innovative products that are able to compete at the national, regional, and global levels.

The 2019 IMACO Award was given directly by the former Minister of Marine Affairs and Fisheries as well as the Founder of Warta Ekonomi, Mr. Fadel Muhammad, and the CEO of Warta Ekonomi, Mr. Muhammad Ihsan to the Executive Director of Dexa Laboratories of Biomolecular Sciences (DLBS) PT Dexa Medica, Mr. Dr. Raymond Tjandrawinata on Monday, 27 May 2019 at Balai Kartini, Jakarta. Also present to accompany the Head of Corporate Communications Dexa Group, Mr. Sonny Himawan.

According to Mr. Raymond, in producing medicines, Dexa Medica uses technology so that the products become international standards. “Modern technology is not only used in production but starting from the research process,” said Mr. Raymond.

Mr. Raymond gave an example, one of the products resulting from modern technology is Glucient SR which is well received in the UK market. This product is produced through slow-release technology, in which diabetic patients only need to take this drug once a day.
The IMACO award that Dexa Medica won in the Excellent in Research and Development of Modern Medicine category is based on research conducted by the Warta Ekonomi Research Team in 5 major cities including Jakarta, Bandung, Surabaya, Medan, Balikpapan, and Makassar. The survey captured the participation of 18,000 millennial respondents aged 20-34 years.

The dominance of millennial participation in the survey is in accordance with the condition of Dexa Group where around 80% of its employees are millennials. “This is because we are also collaborating with universities in Indonesia to get good and quality talents. Hopefully, with this title, Dexa will continue to be the pride of generation to generation and can maintain its reputation and bring this company to the forefront of research development and innovation. pharmacy at the national and global level,” said Mr. Raymond after receiving the award. Corporate Communications coverage from Jakarta