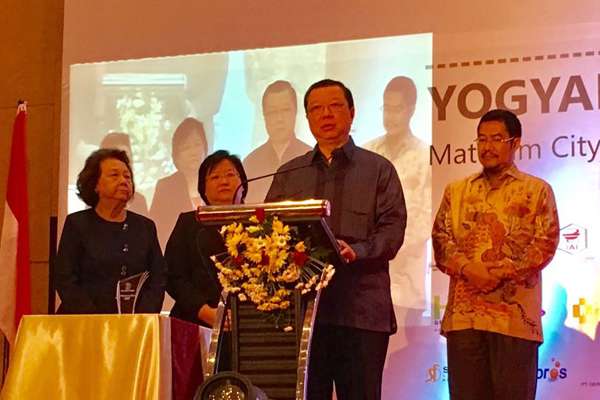 IAI Award 2016 was handed over by the Chairman of the Central Board of IAI, Drs. Nurul Fallah, Apt., to the Co-Founder of Dexa Medica, Dra. Hetty Soetikno, accompanied by the President Director of Dexa Medica, Ir. Ferry A. Soetikno, M.Sc., M.B.A., on Wednesday, September 28, 2016 at the Alana Hotel, Yogyakarta.
The IAI Award 2016 handover ceremony was held in a series of important events of National Working Meeting & Annual Scientific Meeting of the Indonesia Pharmacist Association (IAI) 2016. The event was held at the Mataram City International Convention Center (MICC), The Alana Hotel Yogyakarta, on September 26-30, 2016, with the theme “Developing Pharmacist Role for Better Quality of Life in AEC Era”.

The late Drs. Rudy Soetikno, Apt., received the IAI Award 2016 in the Entrepreneurship category because of his love, passion and contributions to Indonesian health care and especially to the pharmacist profession, until he deceased. This IAI Award was the first time being held by IAI and expected to become the motivation and inspiration for today’s pharmacist from exemplary pharmaceutical practice gave by the award receivers.

At the award handover ceremony, a video about the late Drs. Rudy Soetikno’s career as a pharmacist was share to audience. The video told the audience about his journey, since starting the pharmacist education in ITB School of pharmacist, until finally he produces quality medicine by establishing Dexa Medica which from the start has the intention to address a shortage of medicine.

There were two categories presented in AIA Award 2016, which are Entrepreneur and Lifetime Achievement. The Lifetime Achievement category goes to Drs. E. Looho, as the founder of IAI and the first Inspector General of Pharmacy, which become the pioneer for Indonesia National Agency of Drug and Food Control; and Mr. Soekaryo who served as Chairman of Indonesian Bachelor of Pharmacy Association (ISFI) with the longest period as well as the figure who fight for pharmacist recognition in the constitution. Corporate Communications Dexa Medica