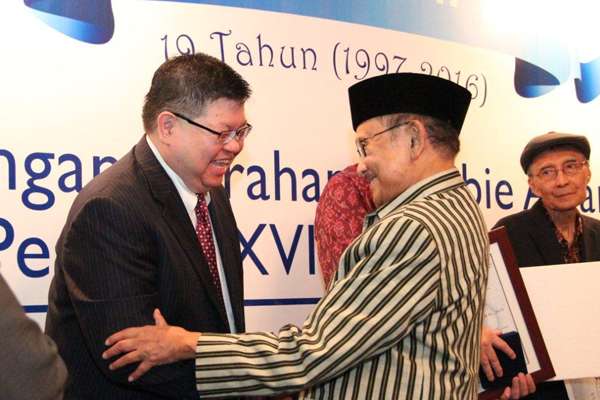 Executive Director of Dexa Laboratories of Biomolecular Sciences (DLBS) Raymond R Tjandrawinata achieve the Habibie Award 2016 in the field of medical and biotechnology on Wednesday, October 5, 2016. The award was handed over by the 3rd President of the Republic of Indonesia, Prof. Dr. Ing. H. Bacharuddin Jusuf Habibie, FREng at Pendopo Habibie Ainun, Jakarta.

The Habibie Award was given annually to individuals who are active and meritorious in the invention, development, and dissemination of all innovative science and technology activities which significantly benefit the improvement of welfare, justice, and peace.

After receiving the Habibie Award 2016, Raymond Tjandrawinata has the opportunity to deliver a scientific speech in front of the selection committee and the invitees. He explained that utilization of natural raw materials as medicines in Indonesia is still very low. Whereas, Indonesia is a country with the second-largest biodiversity in the world. The low support to conduct clinical research for medicinal plants becomes one of the factors.

“This is unfortunate due to the big potency. Every year, many foreign pharmaceutical companies try to find medicines from natural raw materials that exist in Indonesia. Meanwhile, in Indonesia, that potency has not been exploited well,” said Raymond Tjandrawinata.

Raymond Tjandrawinata also explained that PT Dexa Medica, through DLBS, is the focus to find raw material medicine from Indonesia. DLBS have produced 46 patents inside and outside of Indonesia in 2008-2016 from Indonesian natural materials research for medicine. A number of research resulting in commercial products, among others are Inlacin and Disolf which have been marketed since 2011. Inlacin is a natural medicine to reduce insulin resistance, which helps to reduce blood sugar. This medicine is prescribed to people with diabetes and women with polycystic ovarian syndrome. As for Disolf which is made from earthworm protein raw material help to relieve blockage in the blood, for poststroke patients, patients after a heart attack, and blockage of blood vessels in various organs.

Confirmed by Raymond Tjandrawinata in his presentation that the independence of natural-based raw material of medicine can only be realized if the government take sides, one of them is through incentive. “From 100-200 plant extracts, maybe only one that fits. Development takes time,” He explained.

Chairman of the Foundation Board of Human Resource of Science and Technology, as the organizer, Prof Dr. Ing Wardiman Djojonegoro said that the Habibie Award receivers are meritorious in the development of science and technology in their fields thereby contributing to national development. The award is expected to make many researchers keep working amid the weak culture of research and concern of the government.