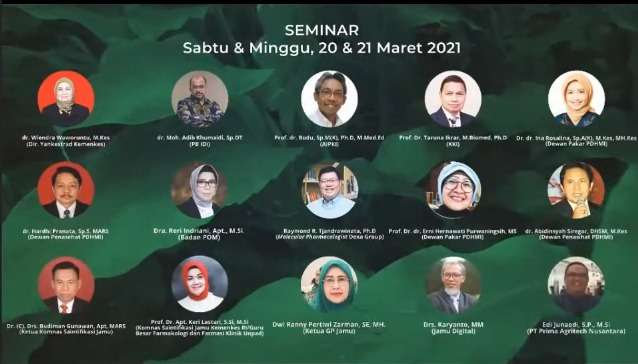 Indonesia Indigenous Modern Medicine (OMAI) has been proven preclinically and clinically for the treatment or therapy of disease. At the 2021 Indonesian Medical Herbal Medicine Association Annual Scientific Meeting (PIT PDHMI), scientists and also health practitioners agreed that OMAI could be used for the treatment of patients.

“The doctors they train as doctors of western medicine, conventional medicine, but in some countries they have the authority to prescribe herbal medicines, for example in South Korea there are 15.26% doctors prescribing herbal medicines, then in China 12.63 %, in Taiwan 9.69%, the highest is in Germany, more than 50% of doctors in Germany are trained and are allowed to write herbal medicines in therapy. Automatically herbal medicines are included in a kind of JKN there, “explained the Molecular Pharmacologist who is also the Director of Business and Scientific Development of PT Dexa Medica, Dr Raymond Tjandrawinata in the PIT PDHMI 2021 webinar, Saturday (20/3/2021).

According to Dr. Raymond, PT Dexa Medica has developed a lot of molecular-based OMAI. He also emphasized that the efficacy of OMAI is not inferior to chemical-based drugs.

“OMAI, which by definition is accepted, is medicinal preparations of natural ingredients in the form of extracts or fractions of plants that grow in Indonesia, native plants of Indonesia and/or plants that have been written in Indonesian herbal books, where research findings are carried out in Indonesia and have data on working mechanisms. which is clear, produced in modern pharmaceuticals and has obtained the status of a Standardized Herbal Medicine or Phytopharmaceutical,” said Dr Raymond.

Dr. Raymond also explained that several OMAIs that have been tested are capable of being substitutes for chemical drugs whose raw materials are still widely imported in Indonesia. These OMAIs include Redacid which is developed from cinnamon (Cinamommum Burmanii), which is proven to be able to treat stomach acid disorders. Then OMAI which is also developed from cinnamon and combined with the bunggur plant (Lagerstroemia) is Inlacin, clinically proven to be able to lower HbA1C for diabetes.

There is also HerbaPAIN which was developed from the crown of the gods (Phaleria macrocarpa), proven to be able to reduce pain. Then there is STIMUNO, clinically proven for 17 years as an immunomodulator.

Dr Raymond believes that Indonesia can reduce dependence on imports of medicinal raw materials by up to 30% if using OMAI. In addition, the development of OMAI can also help the economy of Indonesian farmers.

In line with Dr Raymond, one of the PDHMI administrators, Dr Rimenda Sitepu, assured that OMAI can be a substitute for disease management. According to Dr. Rimenda, the development of natural medicines into OHT and Fitofarmaka is an effort to prove scientifically.

“Native Indonesian Modern Medicine can be used as a substitute or complementary in the treatment or therapy of a disease condition, it takes a lot of research on natural drugs, which can be a consideration for doctors to use in an effort to treat patients based on Evidence Base Medicine,” said Dr. Rimenda.

Meanwhile, the Food and Drug Supervisory Agency (POM) continues to support clinical trials of Indonesian natural ingredients which are empirically proven to become OMAI. “One of the breakthroughs is that BPOM accelerates clinical trials of traditional products for herbal medicines which are for endurance and are empirically proven to go directly to clinical trials,” said Deputy for Supervision of Traditional Medicines, Health Supplements and Cosmetics of BPOM, Dr. Reri Indriani.

Importance of Regulation for Herbal Doctors
Director of Traditional Health Services, Directorate General of Health Services, Ministry of Health, Dr. Wiendra Waworuntu in the discussion stated that the interest of the Indonesian people towards traditional medicine was very high. This is shown by the 2018 Basic Health Research (Riskesdas) data that as many as 44.3% of Indonesians use traditional health services for health.

However, according to Deputy General 1 and Chair of the Elected Executive Board of the Indonesian Doctors Association (PB IDI), Dr Muhammad Adib Khumaidi, Sp.OT, currently medicines from natural ingredients or what some people consider traditional medicine in Indonesia are still not like in Japan. . In the land of Sakura, traditional medicine is recognized by the government and even covered by health insurance.

He then pushed for the formulation of regulations that legitimize herbal medicine in Indonesia. The chairman of the Indonesian Medical Council (KKI), Prof. Taruna Ikrar, said the same thing, that until now his party had never issued an STR for Medical Herbal Doctors because there was no legal umbrella.